Getting to Yes by Roger Fisher and William Ury 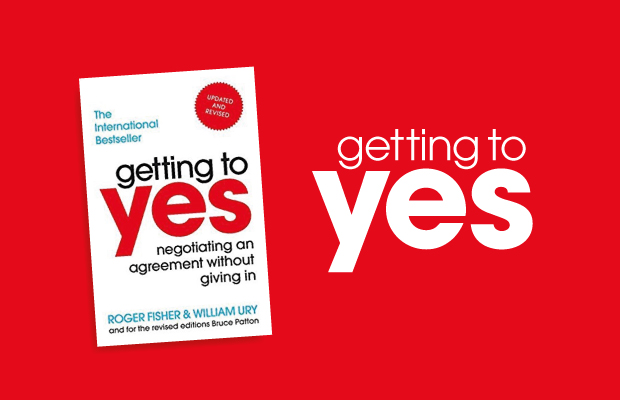 Thank you to all those that have asked me to recommence Mustard’s book reviews, so I am pleased to be able to say that the Mustard Book of the month is back by popular demand.

A hot topic at the moment is Brexit negotiations. I write this before the results of the general election and the different political parties ability to negotiate a Brexit deal has been prominent in the campaigns. Getting to Yes by Roger Roger Fisher and William Ury is subtitled “negotiating an agreement without giving in”.

First published in 1991, the National Institute for Dispute Resolution Forum says “Getting to Yes has an unrivalled place in literature of despite resolution. No other book in the field comes close to its impact on the way practitioners, teachers, researchers, and the public approach negotiation”.

One of the reasons why this book is held in such high esteem is because it changed many people’s perception of how to negotiate. People find themselves in a dilemma. They see two ways to negotiate: soft or hard. The soft negotiator wants to avoid personal conflict and so makes concessions readily to reach agreement. He or she wants an amicable resolution, yet often ends up exploited and feeling bitter. The hard negotiator sees any situation as a contest of wills in which the side that takes the more extreme positions and holds out longer fares better. He or she wants to win; yet often ends up producing an equally hard response that exhausts the negotiator and his or her resources and harms the relationship with the other side. Other negotiating strategies fall between hard and soft, but each involves an attempted trade-off between getting what you want and getting along with people.

There is a third way to negotiate, a way neither hard nor soft, rather both hard and soft. The method of principled negotiations developed by Fisher and his students at the Harvard Negotiation Project is to decide issues on their merits rather than through a haggling process focussed on what each other says it will and won’t do. It suggests that you look for mutual gains whenever possible, and that where your interests conflict you should insist that the results be based on some fair standards independent of the will of either side. The method of principled negotiation is hard on the merits and soft on the people. It employs no tricks and no posturing. Principled negotiation shows you how to obtain what you are entitled to and still be decent. It enables you to be fair while protecting you against those who would take advantage of your fairness.

The principles of negotiating are :-
1. Don’t bargain over positions
2. Separate the People from the Problem
3. Focus on Interests, Not Positions
4. Invent Options for Mutual Gain
5. Insist on using objective Criteria

Getting to Yes has lots of practical examples of overcoming seemingly impassable obstacles and examines many examples of good and bad negotiations. Fisher himself was involved in many high level international negotiations including the Camp David summit that led to an Israeli-Egyptian peace treaty.

There is currently a lot of discussion about a ‘Hard Brexit” and a “Soft Brexit” and how that translates into “Hard negotiating” and “Soft negotiating”. I can only hope that is political posturing and whoever negotiates Brexit knows how to Get to Yes!

Back to News Next

Curious to know how Mustard could help your business?

Contact us today for more information. Our initial consultation is free.

Mustard is proud to be a Global Welsh Pioneer